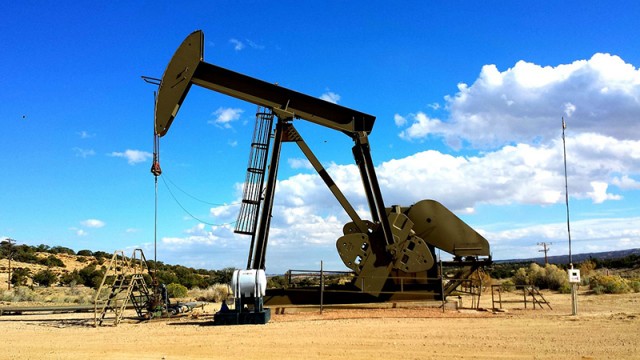 America could become a net energy exporter by 2020. America is now the world's biggest producer of oil. Wow!

And American crude oil is the best in the world. Really. We make the best oil. Ever. In fact, it's arguably too good…

And oddly, that's a problem. A light, sweet problem. And, we have an infrastructure problem…

But first. Some background. As many of you know, there are many different grades of crude produced and traded around the world. For our purposes and for simplification, we can break those down to light, sweet crude and heavy, sour crude."Light" grades are distinguished based on what is known as API gravity - a measurement of density. A majority of U.S. shale crude output growth is at the top of the scale with API gravity above 40 degrees. On the other hand, heavy crude oil or extra heavy crude oil is any type of crude oil which does not flow easily. It is referred to as "heavy" because its density or specific gravity is higher than that of light crude oil. Heavy crude oil has been defined as any liquid petroleum with an API gravity less than 20°. ​
Generally speaking, Light crude oil receives a higher price than heavy crude oil on commodity markets because it produces a higher percentage of gasoline and diesel fuel when converted into products by an oil refinery. Heavy crude oil has more negative impact on the environment than its light counterpart since its refinement requires the use of more advanced techniques and the use of contaminants​.
Moreover, simple distillation — first-level refinement — of different crude oils produces different results. For example, the U.S. benchmark crude oil, West Texas Intermediate (WTI), has a relatively high natural yield of desirable end-products, including gasoline. But the process also yields about one third "residuum," a residual by-product that must be reprocessed or sold at a discount. In contrast, simple distillation of Saudi Arabia's Arabian Light, the historical benchmark crude, yields almost half "residuum." This difference gives WTI a higher premium.
In terms of worldwide production, the following chart explains the relative density and sulfur content of the various, most commonly traded, crudes: ​​ 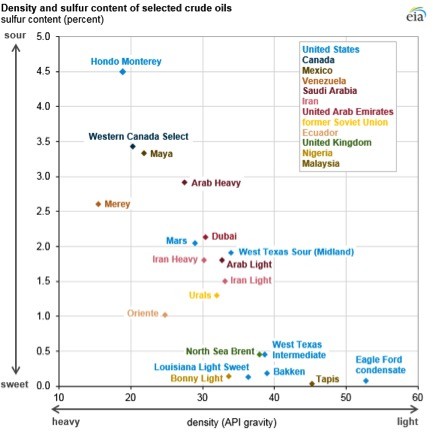 But that is only part of the story.Processing heavy-sour crude oil requires additional refinery units—including crackers, cokers, and hydrotreaters—to yield light products. These additional units increase refinery complexity but also allow the refiner more flexibility to select types of crude oils to purchase and run through their refineries, potentially increasing profitability.

Even where refiners are capable of processing light/sweet and heavy/sour, the economic calculus of which is best to process is constantly shifting.Moreover, and worth noting: even where a refiner can use light/sweet for a percentage of their total processing, their refineries always need some portion of heavy/sour.So, while more complex U.S. refineries are configured to run on grades of crude with an API gravity of around 31-33 degrees, most refineries cannot simply take in only lighter crude, because it would affect operational efficiency.While some refiners can run on a slate of 70% light/sweet, Valero, Marathon Petroleum Corp, and Andeavor, three of the largest independent refiners, have recently had more downward earnings revisions over the last 30 days than other independent refiners, according to Thomson Reuters data. Those refiners, with multiple facilities on the Gulf Coast, rely more on imports from Latin America.

For example, for the six months through January, Valero imported 6 million to 7 million barrels of heavy crude a month, and only 10 to 15 percent is from Canada, according to the EIA, with the bulk from Mexico, Venezuela or other Latin American nations.That is because Valero only uses about 25% light/sweet in its crude slate on average, with makeups ranging from 17-37%.

So, what's the problem?

The problem is: where does all this beautiful light/sweet Texas crude go?

Ahh…if you watched our last video, you may remember I talked about and a bit bemoaned pipeline capacity problems in the Permian.This lack of pipeline capacity is obvious when one considers the spread between the WTI Midland Spot Price and the Houston Spot price.As of December 14, crude at Midland was pricing $4.45 per barrel below crude in Houston, which is wider than the applicable pipeline tariff indicating a need for additional infrastructure.

And this difference may be critical.Critical because of comparing markets for U.S. crude, and to provide for market opportunities for our crude in other countries, it is critical to lower that differential.

Let's take an example.China.China's imports of U.S. crude reached a record high of about 460,000 bpd in June, according to data provided by Refinitiv. In fact, in the first nine months of this year, China imported about 328,000 barrels per day (bpd) from the United States, representing about 3.6 percent of its total crude imports.

But the bigger question is: Can U.S. light sweet compete in Asia with grades like Nigeria's Bonny Light and Angola's Girassol?Comparing WTI Houston to Girassol shows that the Angolan grade traded at a small premium on January 4, closing at $56.24 a barrel to WTI Houston's $53.38.

The small price advantage for the physical WTI is not enough to overcome the higher cost of a longer voyage to Asia, meaning that U.S. crude is currently uncompetitive.

In addition to the lack of pipeline capacity to get our crude to various parts, is the complete lack of Port facilities to ship the crude.Currently, only one U.S. facility, the Louisiana Offshore Oil Port, can fully load supertankers capable of carrying 2 million barrels. The Corpus Christi port - the closest to the most prolific shale fields in Texas - exports less than 1 million bpd, and its harbor is too shallow to fully load supertankers.

There are currently seven proposed oil-export projects, with multiple competing options to build a port in Corpus Christi capable of filling supertankers. The Corpus projects are of particular note: when the new pipelines from West Texas open this year, the current estimated volume is 2.1 million bpd of new pipeline capacity heading directly to Corpus. The current frontrunner, a joint venture project between the Port of Corpus Christi and the Carlye Group for on onshore port would be able to handle 1.4 million barrels per day.

Simply put, America has an infrastructure problem that is materially affecting our industry and its ability to grow. As noted before, light/sweet, while preferable in many aspects to heavy/sour, is not a perfect substitute and both are needed. Therefore, to support America's continued growth as an oil producer, we must either retool already existing U.S. refineries, which is not a feasible option given already intensive capital investments in the existing refineries, or find markets that desire our crude to which we can export our crude in an economically competitive manner. And for that, we desperately need infrastructure.So, America – right now – our crude is too good!

Hopefully, as our oil industry continues to grow, so will our ability to export and so will the demand for light/sweet crude as refineries around the world seek to maximize production and obtain the economic efficiencies that derive from adding more light/sweet into their refining slate.

The other problem, as noted briefly above, is that American refineries are still dependent on some amount of heavy/sour. Even the more advanced refineries geared towards operating on light/sweet have to have some proportion of heavy/sour in their slate.

And the question now becomes: where will that come from and how will it affect our industry. As many of you know, this week the United States imposed sanctions on Venezuela, which has caused a spike in the oil price.Venezuelan crude has become critical to operations of America's refineries.

Venezuela, on average, exported about 500,000 barrels of crude a day to the United States in 2018, according to U.S. Energy Department data. Those shipments fell in November to an estimated 358,000 barrels per day, however, according to a report by Caracas-based consultancy Gas Energy Latin America as reported by Reuters.

While U.S. officials have repeatedly assured the American public that other sources will make up the heavy/sour needed to continue refining at current rates, the supply chain is dubious. Canada has some pipeline capacity problems. Mexico simply doesn't have the capacity at this time.And Saudi Arabia, who just recently turned off the pump, in part burned by U.S. officials leniency on Iranian sanctions, is certainly not going to rush to fill the void.

While God blessed Texas with his own hand and gave us the best crude in the world, we will still need other markets both for our own refining needs and to find a market place to export so we can grow our industry. For more thoughts, see this week's Ty's Take.