Is a Global Slowdown on the Horizon? 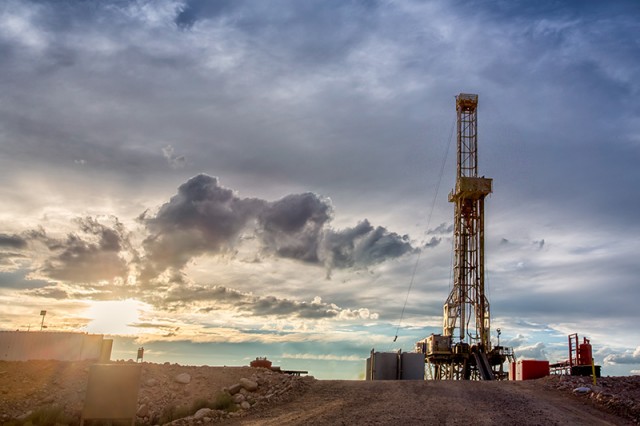 As will be discussed in this week's Ty's Take, my previous concerns, expressed in our 2019 Market Outlook regarding the supply side of the oil equation are abating. However, they have been replaced by concerns on the demand side.

A booming U.S. and world economy may be showing signs of slowing down. U.S. manufacturers reported the broadest slowdown in growth in December for more than a decade. The Institute for Supply Management's Purchasing Managers' Index slumped by 5.2 points in December from the previous month, the largest monthly fall since October 2008. While manufacturers reported increases in all relevant categories indicating that the sector continues to expand, the new orders component slumped by 11 points, barely above the threshold that divides expansion from contraction.This suggests a loss of momentum extending into 2019.

Evidence of a global slowdown has been present for months and now appears to be headed into recession unless something stops it. The OECD's composite leading indicator fell to just 99.3 points in November, its lowest since October 2012, and down from a peak of 100.5 at the end of 2017. The OECD composite leading indicator has been weakening consistently for the last year and now points unambiguously to a contraction ahead.And as a side note, over the last 50 years, with one exception, whenever this index has fallen below 99.3, there has almost always been a recession in the United States. 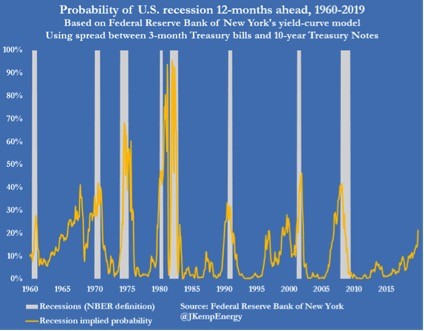 Moreover, U.S. CONSUMER CONFIDENCE has fallen sharply this month according to preliminary results from the University of Michigan survey of consumers. The consumer confidence index fell by -7.6 points in Jan compared with Dec, the largest one-month decline since 2012, taking it down to the lowest level since 2016: ​ 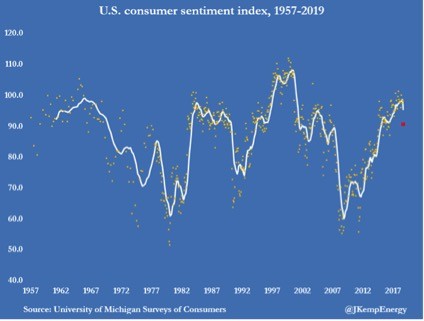 Similarly, Freight rates have been in free fall since mid-2018. The Baltic Dry Index, measure of ship transport costs for materials like iron ore and coal, has fallen by 47 percent since mid-2018, indicating a lack of demand. Similarly, the Harpex Shipping Index, which tracks container rates, has dropped by 30% since June 2018. These seem to underscore weakening manufacturing data from Asia, Europe, and North America.

A recent survey of businesses in the Euro zone suggests that growth has nearly stalled out at the start of 2019.Germany's GDP grew a mere 1.5% in 2018, its weakest rate in five years and a clear slowdown from the previous year.Germany is Europe's largest economy and is struggling with a cooling global economy. And Japan has posted weak data as well. According to data released January 31, 2019, the economy for the euro-zone as a whole grew an anemic 0.2% between third and fourth quarters last year. Italy slipped into an outright recession.

One additional economic indicator of particular note for those of us in the oilfield services industry: diesel futures.Most middle distillate fuels such as diesel are consumed in freight transport. Therefore, their consumption is closely tied to the state of the economy – even more than refined fuels such as gasoline. Net long positions generally reflect a belief that the U.S. and global economies will expand while a large net short position have been associated with slowdowns or recessions. Non-commercial traders started 2018 with a record bullish position in U.S. diesel futures equivalent to 64 million barrels of fuel, with more bullish positions held in options and European derivatives such as gas oil.

At the start of the fourth quarter, they still held a very large net long position equivalent to almost 48 million barrels, suggesting most speculators continued to anticipate a strong economic expansion.

But the net long position had disappeared by the end of November and turned into a net short of 8 million barrels by the middle of December, coinciding with the slump in equity markets and fears about the economic outlook.

The economic data is consistent with revised projections from the International Monetary Fund. The IMF's most recent update of the World Economic Outlook now projects global growth at 3.5% in 2019 and 3.6% in 2020, 0.2 and 0.1 percentage points below last October's projections.While this downward revision appears modest, the IMF noted that the risks of a more significant downward correction is rising.

While global growth has been on a downward trend and has been slowing for months, the United States heretofore appeared immune.Indeed, the United States has had a booming economy, experiencing GDP growth that flirted with 3%. That GDP growth slowed to 2.6% in the fourth quarter of 2018, according to a survey of economists by the Wall Street Journal (note: we do not have official government statistics due to the shutdown). While maybe showing signs of slowing momentum, that is still a healthy growth rate. Moreover, U.S. jobless claims hit their lowest level since November 1969 in the week ending January 19. 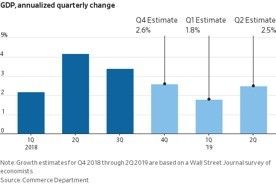 While there is little doubt that the global economy appears to be headed for a downward correction, the U.S. is simply not there yet.Nevertheless, sufficient warning signs do exist so as to raise a concern. As Morgan Stanley Investment Management's Ruchir Sharma notes, professional forecasters have missed every U.S. recession since such records were first kept half a century ago. (click here to article)