As we have noted in a prior edition of The Five Star Standard, the U.S. is set to become a net energy exporter.The U.S. has rapidly moved up to be one of the biggest (at times the biggest) oil producers: 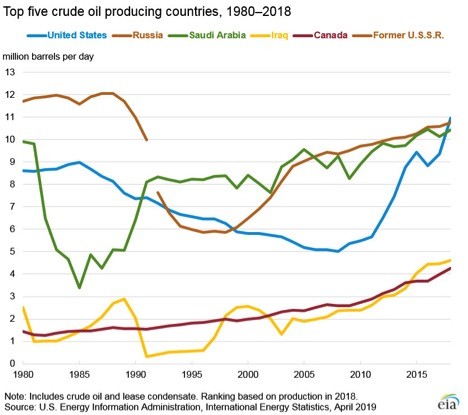 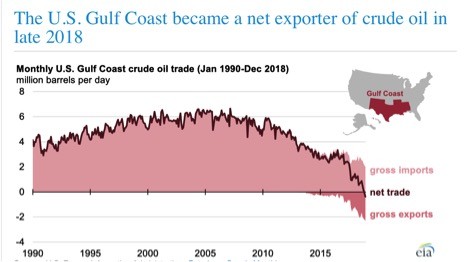 In 2018, U.S. net imports (imports minus exports) of petroleum from foreign countries averaged about 2.34 million barrels per day, equal to about 11% of U.S. petroleum consumption.1 This was the lowest percentage since 1957.

Where Does the Crude Go?

In 2018, U.S. exports of crude oil rose to 2.0 million barrels per day (b/d), nearly double the 1.2 million b/d rate in 2017. Export volumes by destination changed significantly during the year, as U.S. crude oil exports to China fell and exports to other destinations such as South Korea, Taiwan, and Canada increased.

In early 2018, the Louisiana Offshore Oil Port (LOOP) in the Gulf of Mexico was modified to enable the loading of vessels for crude oil exports. LOOP is currently the only U.S. facility capable of accommodating fully loaded Very Large Crude Carriers (VLCC), vessels capable of carrying approximately 2 million barrels of crude oil.

After LOOP was modified to also allow exports, the increase in cargo scale led U.S. crude oil exports to surpass 2 million b/d for 25 weeks in 2018 compared with just 1 week in 2017. In addition to LOOP, other U.S Gulf Coast export facilities in and around Houston and Corpus Christi, Texas, have been investing in increasing the scale of U.S. crude oil export cargos. 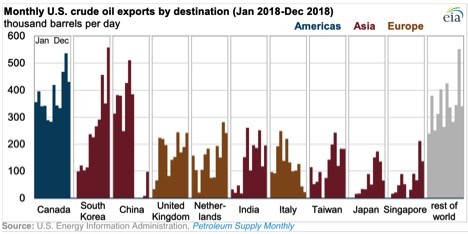 Why Do We Export Crude?

It comes down to the quality of the oil that is being produced, versus the kind of oil U.S. refineries are built to process.

Over the years, U.S. crude oil has gotten progressively heavier and sourer (meaning it contains larger hydrocarbon molecules as well as more sulfur.) Globally, heavy crude production increased in places like Canada, Venezuela and Nigeria. A wide price differential developed between heavy, sour crudes and light sweet crudes like WTI and Brent. Because crudes that are heavy and/or sour can produce about the same amount of finished products as lighter, sweeter crudes, refiners had a strong financial incentive to process the discounted crudes.

So U.S. refiners spent billions of dollars installing fluid catalytic crackers (FCCs), cokers, and hydrotreaters that are needed to process heavy sour crudes. After investing all of that money into processing the heavy crudes, the economics of running Bakken or Eagle Ford crudes in a heavy oil refinery are far less appealing than running a heavy Canadian or Venezuelan crude.

Heavy oil refiners would rather simply continue to import oil more suited to their needs, while the light, sweet crudes coming out of the U.S. shale plays are often a better fit for certain foreign refineries. Or, logistically it may simply be easier for Canada, for instance, to import U.S. crude for their East Coast refineries, while they export their heavy oil from Alberta to U.S. refineries that are equipped to process it.