Will a Wave of Consolidation Hit the Shell Patch?

In our Five Minute Fridays series, we discussed the Chevron offer for Anadarko. At the time (link: https://www.youtube.com/watch?v=SFyUzEZiZHE). At the time, the details of their merger were pretty clear:

The transaction would provide additional benefits as it would give Chevron significant contiguous land holdings in the Permian.

While Occidental had been a contender for the deal, Chevron ultimately bested them.Until this past week. Occidental said in a letter to Anadarko's board on Wednesday that its bid is worth $76 per share in cash and stock and would give Anadarko shareholders $38 in cash and 0.6094 shares of Occidental stock for each Anadarko share.

So What is Going on in the Shale Patch?

U.S. Shale production has exploded. U.S. shale production in 2018 grew faster than it did during the boom years of 2011 to 2014 according to the IEA. It seems everyone wants a piece of this short-cycle component.

But there are problems. Lots of problems. You may remember, that in the last edition of The Five Star Standard, we discussed the parent-child problem. Shale companies have ramped up production and sought to front load production. As a result, wells are producing far more on the front end. 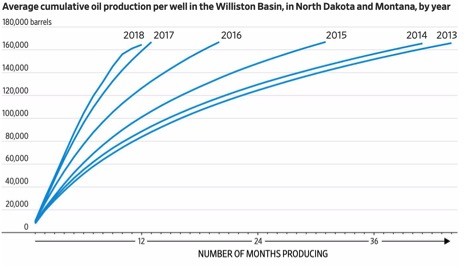 The problem is, as noted in the parent-child article, is that these wells tend to produce far less oil in the long-run than traditional wells. In the Williston Basin, which extends into North Dakota and Montana, newer wells drilled by EOG Resources Inc. are producing less oil and more gas than their predecessors, according to data from Shale Profile, an industry analytics platform. The company's wells there that began producing in 2013 generated an average of about 227,000 barrels of oil in their first year. At that point, they were producing on average 1,122 cubic feet of gas for every barrel of oil.

Wells in the same area that began producing four years later generated an average of roughly 134,000 barrels of oil in their first year, a 41% decline, data show. Meanwhile, the ratio of gas to oil produced climbed to an average of 2,027 cubic feet of gas for every barrel of oil.

And that puts Shale drillers in a continuous negative cycle.They need to generate cash to drill and they have to keep drilling to produce that cash.

And Wall Street is Not Happy.

In December of 2017, twelve major shale shareholders, who represented holdings of nearly 5% of the shares of major shale companies, met with shale producers and told them to start turning a profit.Since 2007, shares in an index of U.S. producers have fallen 31%, according to data provider FactSet, while the S&P 500 rose 80%. Energy companies in that time have spent $280 billion more than they generated from operations on shale investments, according to advisory firm Evercore ISI.

These major investors have pressure Anadarko, Continental, Pioneer, and other major shale players.

The problem is this: returns from individual wells can be good, but shale wells tend to pop online with a gush and then peter out fairly quickly. That has meant operators sink profits back into more new wells that can take another two years to become profitable, with shareholders told to hang on for a payday.

And all of this may be leading to a bigger problem for shale drillers: the lack of free cash flow, the never ending cycle of needing to drill to quickly produce regardless of the long-term costs of lost barrels, and their inability to actually be profitable might be leading to ever more tightening of their credit facilities.Overtime, that is a recipe for disaster.

A Wave of Consolidation

Occidentalupping the ante on Chevron is not just a coincidence. The real question is: will the consolidation efforts spread throughout the industry.

Shale Companies may be reaching their peak. As Rystad Energy observed in late 2018, the market remains unconvinced a typical shale producer "is able to grow in a self-sourced manner as more than 75 percent of dedicated U.S. shale oil companies keep reporting capex figures in excess of cash flow from operating activities." A February 2019 research note from J.P. Morgan added that investors are skeptical producers can meet their capex budgets, "as the 2019 guides generally imply meaningful declines from 2018 actuals."

In other words: Shale has a problem. And that problem is getting more and more acute as oil prices rise and they fail to produce sufficient profits.

For big oil, the problem is reverse.They produce profits, but they were late to embrace the shale revolution.So they are playing catch up.Lacking a short cycle component (and by this, I don't just mean acreage, I also mean the technical ability to execute well), the prime acreage has already gone to smaller operators and they are behind the ball game. Buying this technology leap frogs them into a more well-rounded company.

Speaking in January of this year, Hess Corp founder and Chief Executive John Hess said shale production now accounted for about 6 percent of global production. "It will probably go up to 10 percent by mid-decade but then it flattens out," he said.

But he added that U.S. resources would start to degrade. "Shale is not the next Saudi Arabia. It is an important short-cycle component," he said.

I believe the oil company of the future will be well rounded, deploying assets in short-cycle, shallow offshore, deep water, and globally.

In the meantime, the Anadarko acquisition may just be the first of many to follow.